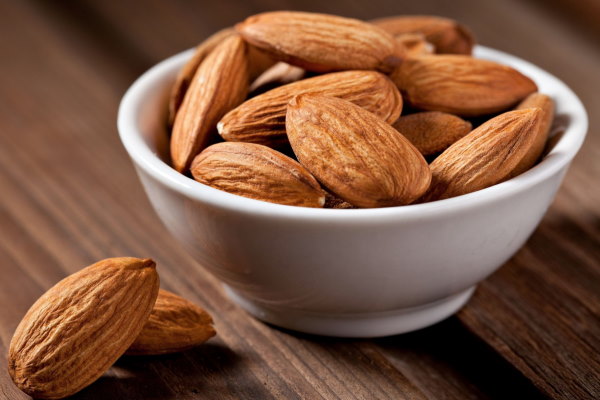 Almond is the name of a tree and also of the edible seed of this tree. It has its origins in Iran and in the surrounding countries, but it is cultivated in many other countries as well. The fruit of the almond tree is a drupe, which has an outer hull and a hard shell with the seed inside. This seed is not a true nut.

Almond trees were spread by humans in ancient times from Iran along the shores of the Mediterranean Sea, and more recently spread in California.

The selection of the sweet type from the numerous bitter types of almonds represents the beginning of the domestication of almond. Domesticated almonds appear in the Early Bronze Age (3000-2000 BC). There was an almond found in Tutankhamun’s tomb in Egypt dating 1325 BC.

Almonds are often eaten on their own, raw or roasted, but they are also components of many dishes, as they come in different forms: whole, sliced, as flour, as powder, as butter, as milk or syrup. Almonds sliced in pieces of 2-3mm are called nibs, which are usually used for decorating especially deserts. Almonds are excellent substitutes for flour, butter and milk for those who suffer of different types of allergies, such as gluten or peanut allergy, or lactose intolerance.

Almonds for Babies and Adults

According to the recent recommendation of the American Academy of Allergy, Asthma and Immunology, almonds along with different types of nuts can be introduced into the diet of infants starting with the age of 6 months. Whereas almonds can be introduced pretty early into the diet of infants, the almond drink is recommended only to toddlers, starting at the age of 12 months.

Soaked almonds are better, because once soaked, the peel comes off easily. The peels contain tannin, which leads to inhibiting the absorption of nutrients.

There are many benefits of consuming almonds: they improve brain function, contribute to the brain development of babies, they help regulate cholesterol and sugar levels (although these are not common problems for babies, but eating almonds throughout our lives is proven to be beneficial at an older age ), being high in fibers they help digestion, they strengthen bones and teeth, and help preventing osteoporosis, as they contain high levels of calcium, they also have anti-inflammatory and antioxidant properties. 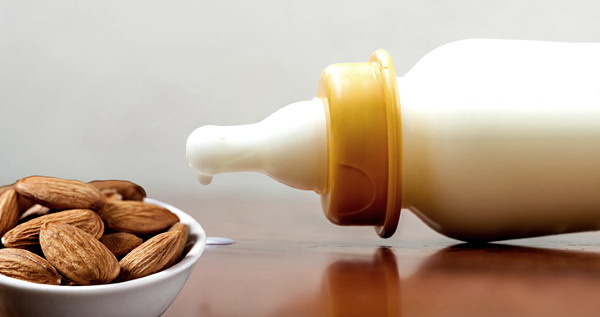 Servings once or twice a day of fortified almond milk to a well-rounded diet and a safe alternative to cow's milk in developing early toddlers. According to the recommendation of the WHO babies younger than 6 months should only have breast milk or infant formula. Do not give cow's milk, almond milk, or any other types of milk to toddlers until their first birthday.

Slice an apple and cook it, until it softens. Add 2 teaspoons of almond powder to the softened apple and boil it. Cool the mixture and blend it until smooth.

Almonds might look like nuts but botanically they are a different kind of fruit called a drupe because have a fleshy outer layer.

How healthy is almonds?

They are very healthy.

When can you start giving almonds to your baby?

You can start giving almonds to your baby at the age of 6 months.

The risks of giving almonds to your baby?

The risks of giving almonds to your baby are low from the point of view of allergies, anyhow there is the risk of choking, if eaten whole. 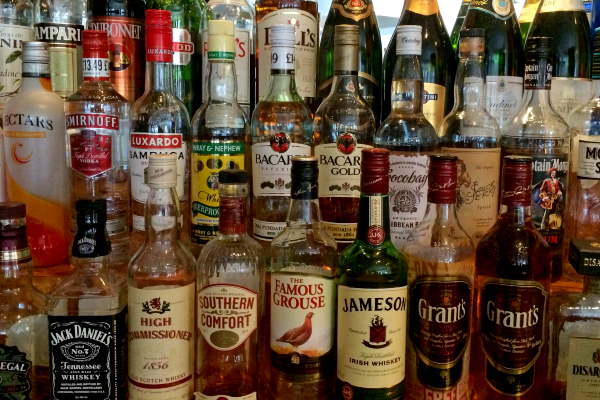 otherAlcoholkeep them out of your children’s reach...
Read More 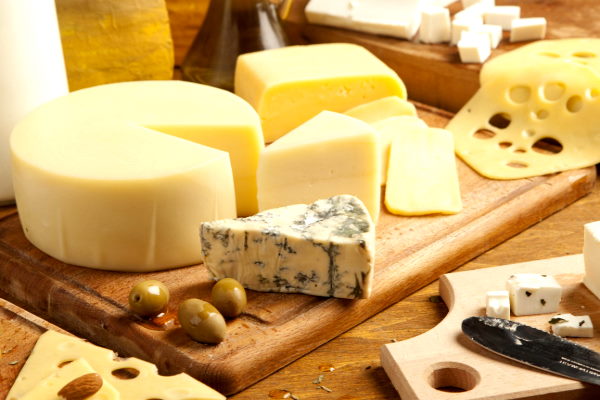 dairyCheesecheese as soon as they start eating solids...
Read More 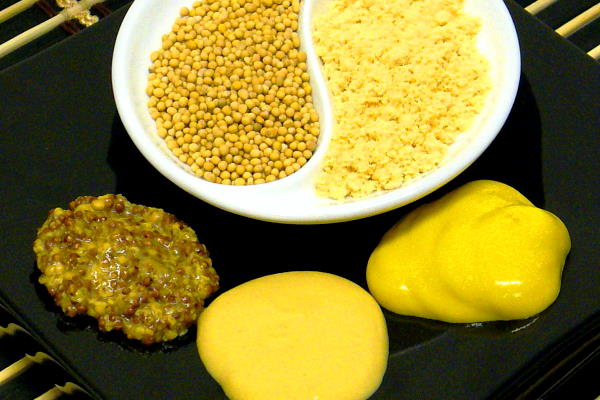 otherMustardimproves digestion thanks to the antioxidants...
Read More 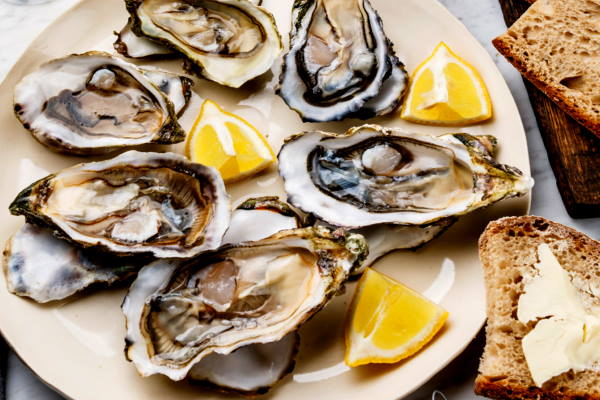 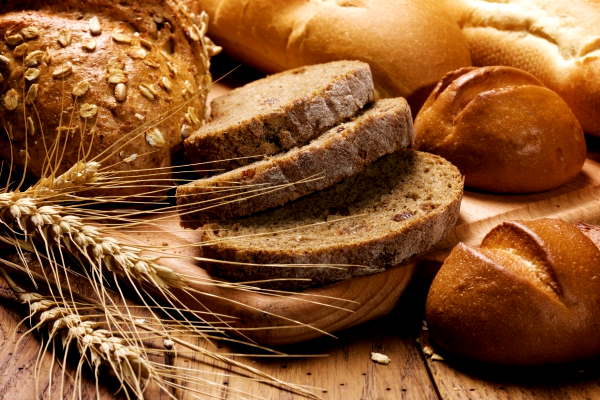 Breadstart giving your baby bread at the age of... 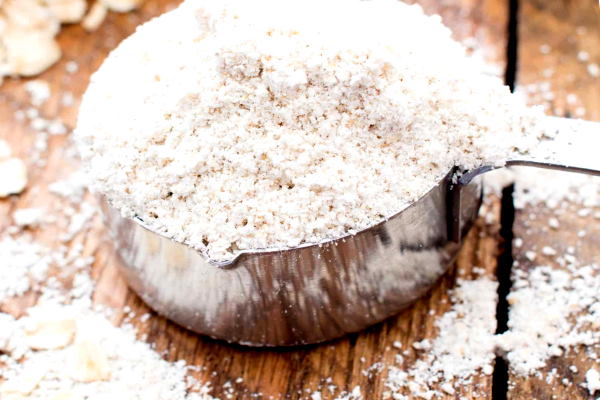 Flourhas its beneficial effect on a baby’s diet... 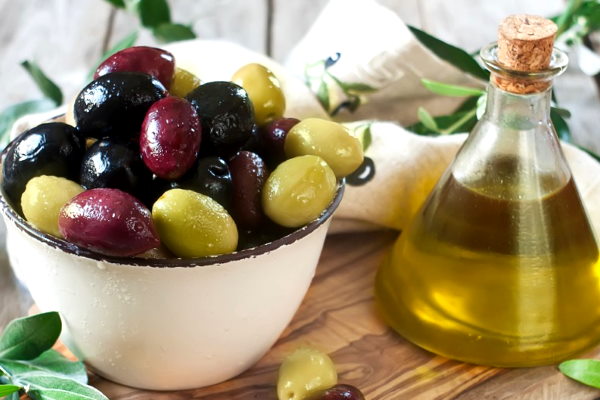 Olivesare cultivated for their fruit and... 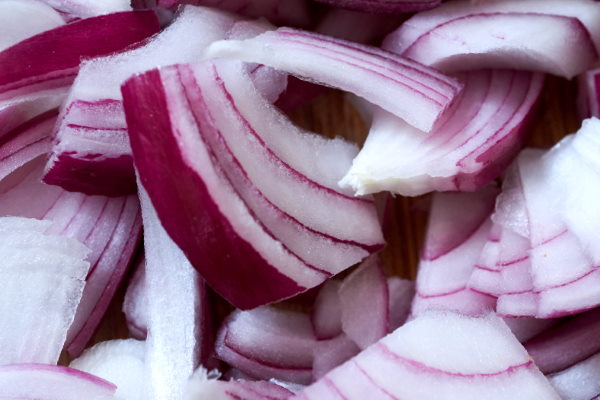 Onionsshould be introduced into a baby’s diet...
Get Social
face tweet lin pin
Leave a Comment
Next Article
Have U Tried?Alcohol